Before today I had no idea why Cubans were so fascinated with Ernest Hemingway. Hemingway was born in Oak Park, IL (about 5 minutes from my house) and spent a considerable amount of time in Northern Michigan (another place I frequently spend time). So personally, I’ve always felt a connection to Hemingway but I couldn’t understand why Cubans felt the same way. Then I learned that Hemingway had traveled all over the world to places like Paris, Toronto, Northern Italy, Spain, Turkey, East Africa, Key West, and most notably Havana, Cuba! I finally realized Hemingway’s inspiration for his novel The Old Man and the Sea. After visiting Hemingway’s house, we learned that the protagonist, Santiago, was based on his real life boat caretaker in Havana.

We stopped to visit a castle next to the sea in Cojimar, where Hemingway kept his boat and did a large portion of his writing. When I stepped off the bus I saw the most serene, Hemingwayesque scene. The water was as smooth as glass and the sunrise illuminated the silhouette of a few photogenic fishermen.  Having just talked about The Old Man and the Sea on the bus, it was the perfect way to visualize what Hemingway would have seen while he was writing. 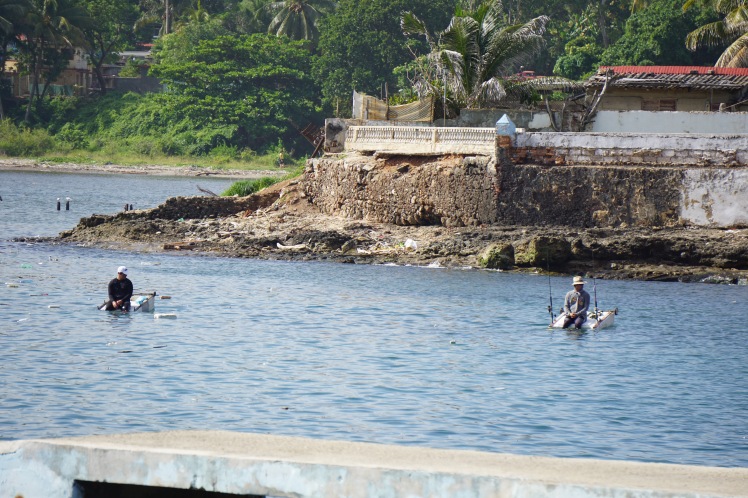 The fishermen we saw did not have the high quality and expensive fishing poles, reels, and other equipment that American fisherman often have. These men didn’t even have boats! You can see in the picture above that they are using an upside down cart as a makeshift raft to fish off of. These “rafts” are not even big enough to hold one person so the men sit on the edge and dangle their legs in the water. Regardless it was a beautiful day to sit beside (or in) the sea and stare out into the vast ocean that inspired much of Ernest Hemingway’s work.