I think the main difference between a tourist and a traveler is their attitude towards the place that they’re visiting. There is no definite black and white distinction, but I feel like tourists take the pretty pictures of them on vacation, they go on their tours of museums and streets where the “native people” live, they eat in touristy restaurants that serve food that they’re used to, and then recede back into their expensive all inclusive hotels with wifi and room service. This is in no way a criticism, in fact, I’d love to do most of those things, but travelers try to see things from the people who live there’s perspective. They get used to the inconveniences instead of complaining about them. Now, I enjoy being a tourist, it’s fun, and new things scare me, but they’re also usually good for me. I 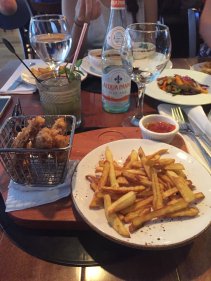 ‘m trying to push myself out of my comfort zone.

In a case of classic but accidental tourism, some of us went to a restaurant about a block away from our hotel called Cha Cha Cha and the first people we met at the door were rude tourists who didn’t feel like moving to let us see the menu on display. We decided to stay because the food looked good. They had chicken tenders and french fries. Cuban right? Well at this point we just wanted to eat somewhere interesting and Cha Cha Cha sounded fun, and it was nice, just not very Cuban.